Sustainable innovations are driving the development of the aquaculture industry and especially that of aquatic feed formulation. The 30-year-old trend to reduce fish meal (FM) inclusion in formulas has led manufacturers to find new alternatives to marine raw materials. Co-products resulting from seafood and food processing are valuable sources of raw materials as long as freshness and supply chain consistency are guaranteed: tuna, tilapia, squid, shrimp, whitefish as well as chicken bases are among the most common sources. If meal process is today dominating the valorization of such seafood co-products, the hydrolysis process can be considered as a better alternative to generate new functionalities to finished products i.e. functional hydrolysates, like higher palatability, digestibility and bioactivities.

ActiTuna is a functional protein hydrolysate

Functional hydrolysates are made by enzymatic hydrolysis of protein raw materials. The very specific equipment used by Symrise Aqua Feed, combined to the high level of control applied during the hydrolysis process ensures the production of standardized products with consistent performance from batch-to-batch over time contrary to many other processes and their resulting products. Such product performance is intimately linked to its peptide profile where quantification of peptide sizes and diversity are essential for predicting the responses of animals fed feed with functional hydrolysates. Any change in the peptide profile could lead to deviation in product performance, either in terms of palatability, digestibility or bioactivity.

ActiTuna is a product manufactured by Symrise Aqua Feed in Thailand and Ecuador, through a fully controlled hydrolysis (process) of tuna by-products, produced by tuna processing industry. Symrise Aqua Feed transforms these raw materials into a functional product releasing a high proportion of bioactive peptides and other low molecular weight nitrogen compounds, so important in aquaculture species such as white shrimp. Such listed functional compounds will help to stimulate shrimp feeding behavior, improve gut health and support animal immunity to help it to resist better to biotic and abiotic challenges.

The recent Rabobank shrimp industry survey (2020) confirmed that in 2020, the two first challenges met by shrimp industry were feed costs and shrimp diseases. Growth rate, through feed intake and shrimp welfare, can also be compromised by environmental conditions when temperature or salinity changes are brutal, or when water turbidity is changing. Limited growth rates, and feed intake, will impair shrimp yield directly (harvested biomass) but also indirectly by impairing shrimp health status and resistance to disease outbreaks, or by resulting in longer growth cycles under unfavorable sanitary conditions.

With more than 10 years of experience, Symrise Aqua Feed has performed hundreds of trials, in its own testing facilities (Aqualis) and with partners, for developing and analyzing many types of functional hydrolysates, assessing their performance in different species and under different testing conditions. The following data will give an overview of ActiTuna performance for different targeted benefits: higher growth rate through higher feed intake or assimilation, higher resistance to infectious challenges and resulting survival rates among others.

Among the many different bioactivities found in marine peptides, antimicrobial ones can find very interesting application in shrimp. Dietary antimicrobials peptides might improve shrimp resistance to opportunistic disease thanks to the enhancement of non-specific health, as well as the modulation of microbiota, reducing the relative load of pathogen bacteria, like Vibrio strains, in the bacteria population.

To demonstrate the antimicrobial performance of ActiTuna, we ran in vitro trials after a separation of the hydrolysate into 30 different peptide fractions based on their molecular weight sizes (HPLC). Each hydrolysate/peptide fraction was tested on 4 different culture solutions of bacterial strains, responsible for major aquaculture diseases. After 6 hours, the absorbance was read to determine whether this peptide fraction had resulted in bacteria growth or inhibition. The results presented in figure 1 demonstrate the presence of antimicrobials peptides in ActiTuna, effective against distinct pathogens.

More than 90% of the protein of ActiTuna is composed of peptides  smaller than 1000Da. Beside antimicrobial activities, low molecular weight peptides and free amino acids are also involved in feed attractivity and palatability, as well as in feed digestibility.

During the last 10 years, Symrise Aqua Feed has implemented 22 trials with ActiTuna included in shrimp feed: 14 of them were dedicated to the replacement of over-exploited marine resources (fish meal or squid meals) while 8 other trials were focusing on “a mere” ActiTuna supplementation (3% on average, from 6% in larval feed to 2% in grower feed) on existing commercial formulations, preferably by its inclusion in feed matrixes.

Results are consolidated in table 2 with colored logo illustrating the trend of each trial outcomes and bold figures showing average performance values for each scope of use: fish meal / squid meal substitution with ActiTuna combined to plant based raw materials or ActiTuna supplementation (on top of the other raw materials of feed formula). In addition to the topic of research, we’ve distinguished as experimental factors: the experimental conditions and type of rearing facilities, and the type of process implemented to prepare experimental diets. To normalize performance indicators obtained under different rearing or dietary conditions, we have decided to base our analysis on the relative increase/reduction of performance observed between the ActiTuna diets and their control ones, expressed as a percentage.

In both scopes, the global trend confirms that using ActiTuna lead to improved shrimp performance, with a reduction of the average FCR and an increase of growth, survival and yield parameters. Nevertheless, it appears obvious that observed performance gains are much higher when the scope of the research was supplementation vs. the replacement of over-exploited marine resources, as for the last one, the objective is to reach, at least, the same performance than the control diet containing more fish meal and/or squid meal. For instance, on average, yield differences obtained between ActiTuna diets, and their controls, were 14% in case of ActiTuna supplementation vs. 5% in case of fish/squid meal substitution studies. A 2-way ANOVA implemented on these factors and zootechnical variables confirmed that only the scope of research (factor: Topic) had had a significant impact on observed differences between these in-vivo assays (table 3) without questioning the positive outcome of marine meals replacement with plant proteins and ActiTuna functional hydrolysate. This may sound intuitive, but we experienced, and demonstrated in a consistent way, that it was possible to maintain shrimp farming productivity, and even increase it, without necessarily relying on over-exploited marine resources, as long as the shrimp dietary nutritional requirements were met. 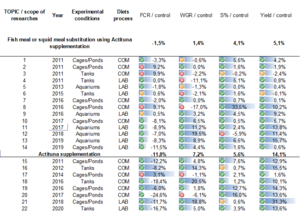 Another key learning of this meta-study, and the related ANOVA analysis, is that in both scopes of research, fish meal replacement or supplementation, the differences observed for survival rates were similar i.e. not significantly different. This indicates that ActiTuna potency as a health enhancing ingredient was not nuanced by the significant replacement of over-exploited marine resources.

Finally, it is also comforting to note that diet process, or experimental facility types, didn’t statistically influence the trends observed between ActiTuna diets and their respective controls.

This review illustrated the process of evaluation of novel ingredients as implemented by Symrise Aqua Feed to meet shrimp industry needs in terms of cost-effective solutions enhancing shrimp performance, and productivity. It was demonstrated that these performances were tightly related to better shrimp survival rates, which were directly increasing shrimp harvested biomass while lowering feed production costs. In our studies, we have correlated the positive trend observed in terms of shrimp health performance under field conditions with lab in-vitro and in-vivo assays (results available upon request) demonstrating ActiTuna stimulation of shrimp immune defenses or antimicrobial potency against aquaculture major bacterial pathogens.

All experimenters know that, in-vivo trials, especially with shrimp, can be subjected to unpredictable and/or unknown biases, resulting in unexpected results. Only meta-study analysis, following several repetitions under different environmental conditions, can provide consistent and reliable conclusions about the efficiency of novel dietary solutions.

This adds to the evidence of robustness obtained with dietary supplementation of such ingredients previously demonstrated with marine shrimp and fish. The latest aquaculture production statistics...

This is a game changer to standardise feed palatability in nutritionally balanced feeds, independent of the quality of other dietary raw materials, and to improve growth performance under standard...