Omnivorous fish species are known to be less demanding in terms of nutritional and palatability requirements and yet dietary hydrolysate supplementation greatly improved production yields and margins.

Several biological benefits are associated with protein hydrolysates and they have been used in finfish larval and juvenile diets for several decades now, mainly due to their high palatability and digestibility.

Symrise Aqua Feed has been producing functional protein hydrolysates for more than 20 years and recently it has promoted the long-term use of a new generation of liquid hydrolysates formulated as palatability enhancers (Palatability Enhancer, Extrapal range; Seguin et al., 2020 & 2021; Soller et al., 2019) in carnivorous fish species dietary formulations. In terms of dietary compositions, these species require palatable raw materials, such as fishmeal. As they are very sensitive to stressful events, which often result in reduced feeding, both farmers and feed manufacturers readily accept the benefits of using Palatability Enhancers.

In contrast, freshwater omnivorous fish species are not perceived to require palatants per se and are considered as less demanding. In these species, feed acceptance becomes an issue during very specific periods, such as wintering. Challenges quoted by freshwater fish farmers are mostly related to feed costs and disease outbreaks.

Symrise Aqua Feed has developed a cost-effective solution to meet these needs by designing ActiTuna Oil which is formulated with the right balance of tuna oil and protein hydrolysate, to make top coating application easier for feed manufacturers as a one step process. The product is designed to increase feed palatability and digestibility for omnivorous fish aiming at the reduction of cost of feeds in farming.

To evaluate the performance of ActiTuna Oil in omnivorous fish species, two feeding trials were carried out with the tilapia (Oreochromis sp) and pabda or butter catfish (Ompok bimaculatus). These two fish species are commonly farmed in Bangladesh. The study took place at Sylhet Agricultural University, Bangladesh.

The same experimental design was used in trials for both species. A basal diet was supplemented by top-coating 0.5%, 1.0% or 2.0% of the functional hydrolysate ActiTuna Oil. The negative control was the same basal diet without any supplementation. In the tilapia trial, the basal diet consisted of a plant-based diet formulated to be closely representative as possible to a local commercial diet with 31% crude protein (CP) and 6% crude lipid (CF, Table 1). In the pabda trial, the basal diet consisted of a locally available commercial diet (36% CP, 7% CF). 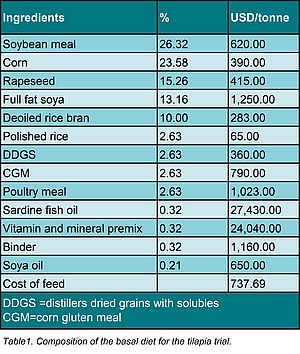 There were three treatments and each treatment consisted of three replicates. Including the control, there was a total of 12 cages of 3m² for each test species. The stocking density was 100 fish/cage and initial mean weight was 5.0g for tilapia and 3.0g for pabda. Fish were fed twice a day at a fixed feeding rate. The total feed distributed over 90 days was 17g per tilapia fish and 20g per pabda fish. Water quality parameters met the requirements for each species. Means for these parameters were: temperature, 30.7±0.3°C, dissolved oxygen 5.04±0.1ppm; pH 6.95±0.07; ammonia 0.06±0.04 ppm and nitrite 0.08±0.04ppm.

Fish in both feeding trials showed very high survival and growth rates after 90 days. Survival rates were at least 93% for both species while specific growth rates (SGR) ranged from 3.46% to 4.15%/day for tilapia and 1.93% to 2.33%/day for pabda. The supplementation of ActiTuna Oil resulted in significant dose responses in terms of mean weights (Figure 1). Maximum weight gains were observed for the 2% supplementation group, with an increase of 86% for tilapia and 43% for pabda. Production yields calculated in terms of tonnes per hectare of rearing area increased by 97% and 52% for
tilapia and pabda, respectively. 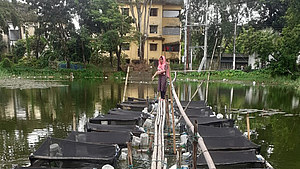 A total of 12 cages, each of 3m² were used for each test species. The stocking density was 100 fish/cage and initial mean weight was 5.0g for tilapia and 3.0g for pabda.

Since feed rations were fixed and remained the same throughout the trial duration, the difference in growth rates can be explained by better feed utilisation,
through enhanced feed palatability reducing feed waste, and improved diet digestibility, thus increasing diet assimilation. These were illustrated by the feed
conversion ratios (FCRs) and protein efficiency ratio (PER) values (Figures 2 and 3). Responses to graded supplementations of the functional hydrolysate were very highly significant for FCR improvements, with a maximum achieved reduction of 49% and 34%, observed in tilapia and pabda, respectively. These benefits can be further developed by two positive outcomes:

Some perspectives on return on investment

These functional hydrolysates from the Actipal range are designed to enhance feed palatability, feed efficiency and the overall health status of animals through their specific peptide profiles. The synergic effect of water soluble free amino acids, short peptide chains and bioactive peptides brings out the optimal flavour of the feed, stimulating fish taste buds and modulating metabolic pathways. This stimulation triggers a series of physiological and endocrinal
responses, preparing the digestive system to properly digest the feed and modulate the microbiota in the gut.

Results from these trials show that there is still some room for feed cost optimisation through better feed acceptance and assimilation, even with omnivorous fish species.

The economic benefit of using ActiTuna Oil as a dietary performance enhancer was demonstrated in Figure 4. Bars showed the expected sales revenues using tilapia and pabda farm gate prices at USD1.58/kg and USD3.15/kg, respectively. While feed costs remain the same, by extrapolation of other variable and fixed costs (seeds, electricity, wages etc), revenues can be higher by 96% (tilapia) and 51% (pabda) leaving a possible margin increase by 69% for the pabda and 424% for tilapia production, assuming other variable costs are negligible compared to feed. The observed differences between the two species are explained by the fact that the tilapia feeding trial started with larger fish. Tilapia also grow much faster than pabda.

Returns on investment (ROIs) were calculated using revenue gains over feed investment costs. Maximum ROIs were observed for the 2% ActiTuna Oil dietary supplementation: 144% and 460% for tilapia and pabda, respectively.

Besides economic considerations, it is worth mentioning that a lower pond water pollution from lower FCR will also contribute to better fish welfare, significantly reducing the risks of disease outbreaks and production losses.

The two feeding trials presented in this article illustrate the positive outcomes, which one may expect from the dietary application of a functional hydrolysate -ActiTuna Oil- by top coating. What is rather uncommon is the demonstration of such production figures in omnivorous fish species, generally considered less demanding in terms of dietary composition, nutrients, and palatability. Farm gate prices of these species are also usually lower than those of marine fish species, which then give a smaller margin for sophisticated feed formulations. However, the estimated values of farm revenues, margins and feed ROIs demonstrated it is possible to generate much higher added values to feed formulas and farm productions of omnivorous fish species. The 2% dietary
supplementation of the functional hydrolysate ActiTuna Oil resulted in maximum growth rates, yields, revenues and ROIs.

We have detailed the positive outcomes expected by fish farmers (higher incomes, lower water pollution and disease risks) mostly explained by a higher feed acceptance (palatability) and assimilation (digestibility), which address the industry needs of lower feed costs and disease risks, as discussed in the introduction to this article. From the feed manufacturers’ perspectives, top coating application of ActiTuna Oil will bring uniqueness and differentiation to a standard formulation. Since competition among feed manufacturers is tough, giving formulators more flexibility in terms of raw material choices is a real asset in these times of scarcity and cost volatilities.

Read the Aquafeed magazine ActiTuna: a functional protein hydrolysate to support better shrimp performance Sustainable innovations are driving the development of the aquaculture industry and...

This adds to the evidence of robustness obtained with dietary supplementation of such ingredients previously demonstrated with marine shrimp and fish. The latest aquaculture production statistics...